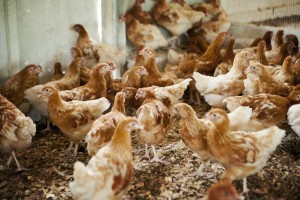 The chickens at seven weeks.

Last Christmas, the Two Pennies Ministry raised $10,000 to provide a poultry farm for the Countryside Orphanage in Bawjiase, Ghana.  The first delivery of 1,000 birds was made in February and for the first six weeks, everything went very well.  In fact, not a single bird died.  Then they were struck by Gumboro disease.  This is a worldwide disease that affects the immune system of young birds.  The flock was devastated, mortality rates exceeded 80%.

A team went to Ghana at the end of March and met with the owners and director of Countryside to see how to proceed.  After praying with them and discussing our options, we decided to proceed with purchasing the rest of the chickens and hiring a veterinarian to assist with keeping the birds healthy.

A second batch of 500 birds was bought in mid-May and divided into two coops as a precaution.  The thought was that if one batch was infected, they would only lose half the flock.  Those chickens have done extremely well and have been added to with the final group of 500 chickens purchased in late July. 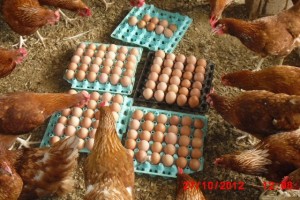 A one day collection of eggs!

By the end of May, we received word from Countryside that the original group of chickens had begun producing eggs.  It was only a few dozen at first, but that soon turned into a wave. That began producing a thousand eggs every month.  The egg production did not stop there.  The second batch of chickens have now begun producing eggs and have only continued to add to the blessing.  The poultry farm at the Countryside Orphanage is producing THOUSANDS of eggs per month.  The picture at the left is a one day haul.  The chickens in the picture are the ones that survived the Gumboro outbreak.

We have been called to act in faith that God has it all worked out.  We often can’t see why he allows things to happen in certain ways, but he calls on us to trust.  The continued blessing of the eggs is a constant source of income for the Countryside Orphanage. For me, it is a constant reminder that God is in control.