The third day of our Journey was spent entirely at Countryside Orphanage.  Kevin, Ben and I spent our time doing interviews for a video Alighted Lantern is producing for the orphanage.  It also gave us the opportunity to extensively tour the facility.

Over the course of our interviews we discovered that the owner Mamma Emma began the orphanage over 25 years ago with only six children – left with her by an American couple who were returning to the States and couldn’t take the children with them.  She struggled for years to make ends meet as the population of her orphanage increased.  In the late 1990’s, Captain Joe joined her.  His story is remarkable in and of itself.  He became a follower of Christ while in prison after killing a thief on his farm.  He decided that when he was freed, he would dedicate his life to helping the downtrodden.  He began tithing his income to Countryside Orphanage and later came to work there full-time.   Together, Mamma Emma and Captain Joe decided that they would transform the orphanage into a “Garden of Eden”.

The grounds we toured were the fruit of that dream.  The orphanage now employs almost fifty people.  They grow bananas, mango, avocado, oranges, pineapples, and countless other fruits and vegetables.  They have pigs, sheep, cattle, goats, ducks and turkeys. 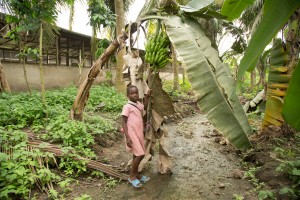 Bananas at the Orphanage

The population of the orphanage has grown to about 140 children.  It is amazing to see how a dream can transform into something so grand.  They still have difficulty though.  With all the workers and mouths to feed, it requires almost $7,000 US to keep the facility afloat.  In months when they don’t have enough to pay their bills, they need to sell some of their livestock to keep up.  The loss of the 870 chickens and 12 cows has been a setback they couldn’t afford.  Kevin and I had a chance to visit the site where the remaining 7 cows were kept about 25 kilometers away.  It was easy (but sad) to see how easily thieves could take advantage of them.

We were given a tour of the school on their property and had a chance to talk to the headmaster about the challenges they face.  After the interview we were treated to a song of thanksgiving.  The children, under the leadership of one of the teachers, sang a song of thanks to the First Baptist Church.  It was very kind and had apparently taken much practice.  It’s moments like these that make you realize how much of an impact our sacrifices make on others.

The children were the real treat of the time spent at the orphanage.  It was rare for any of us to walk anywhere without a gaggle of children surrounding us, holding our hands and clinging to us.  They loved having their  pictures taken and asking our names. 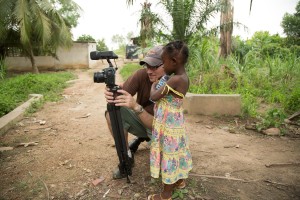 They especially liked Kevin, as there was a child at the orphanage named Kevin.  It wasn’t long before we heard “Kevin!” called out wherever we went.  The names Jim and Ben apparently weren’t too common, so in the end we all went by Kevin.

The fourth day of our Journey began at Countryside and ended in Cape Coast.  We began our work by finishing up our filming of the orphanage and discussing the upcoming summer trip with the director.  In Africa, setting a schedule four months away can be a challenge, but came away with the information that we needed.  By 11:00 were picked up by Uncle T and taken back to Accra to catch a bus for Cape Coast.  Travel from Accra to Cape Coast is by fifteen passenger Ford vans.  This is one of the nicest ways to travel in Ghana, but still not comfortable.  When they say 15 passengers, they mean it.  Plus luggage.

We arrived safely (but slightly rattled from the driving) two and a half hours later in Cape Coast.  Aboagye took us to the site of another library – this time in Asebu.  Contrary to the library in Myera, this one will require quite a bit of work and a miraculous donor (or two).  The library had been started in 1998 and the project shut down from lack of funding a year later.  Since then, the half completed walls have suffered from the elements. 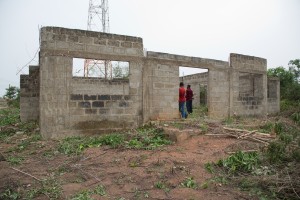 The Asebu library as it stands today

They had a dream of furthering the corporate knowledge of their community, but ran head-on with reality.  We made no promises, but told them we would see what we could do.  We then met and interviewed the head pastor of several local Pentecostal churches.  His name is Michael and he was extremely articulate, sharing with us that he would like to help his congregants by teaching them marketable skills, but he lacks the knowledge and asked if we could help with this.

As it was dusk, we began to head back to our house in Cape Coast and ran into the chief of Asebu.  Surprisingly, it was a woman (one of only 3 in the entire country)!  She also shared with us their desire to complete the library project for their community.  Her husband Ebenezer was gracious and asked us many questions about why we were there.  It gave us the opportunity to share our hearts with him.  By the time we left and arrived back at the house, it was well past dark.  Taking it all in was quite a challenge and the busy days gave us a lot to think about.