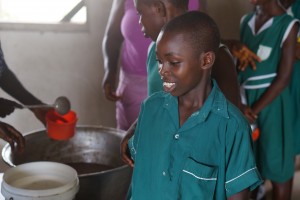 Students going through the lunch line for the first time.

Last December, January and February, First Baptist Church of Elgin, Southbury Elementary in Oswego and Sycamore Trails Elementary in Bartlett teamed up to provide lunches for school children in Ghana.  Our team that visited the school to work with teachers there were able to witness the beginning of the first lunch program.  We were able to see the excitement on students’ faces as they were served lunches for the first time in their lives.  The teachers immediately commented on the attentiveness of students in the afternoon and the difference it made in their practice.

By the end of our week in Ghana, it was obvious that the lunches were making a huge impact.  As we sat down with the teachers for breakfast on our final Saturday in Ghana, we talked about the future of the lunch program.  We had only raised enough money for the program to continue until October or November and the thought of doing a huge new fundraising campaign was daunting.  Through our dialogue, we realized that the school wasn’t looking for continued handouts – they wanted to be able to provide for themselves.  Unfortunately, most Ghanians in that region only make the equivalent of a couple of dollars a day.

As our conversation turned to ways that the school could provide for itself, we realized that many of the teachers had to work several jobs just to stay on top of their living expenses.  Two teachers in particular – Mr. Awotwe and Mr. Muhammed had both worked in agriculture. 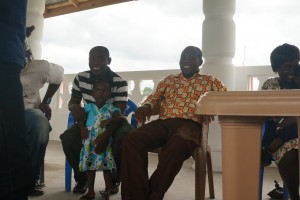 We discussed having the children help to provide for their own food by starting an agricultural program at the school.  This would have two advantages – first, if it worked, a farm could provide a long term solution to the school lunch program.  Second – this is a mainly agrarian region with many of the students looking at farming in their future.  A curriculum that helps them use what they know and learn about new farming techniques would give them a head start. 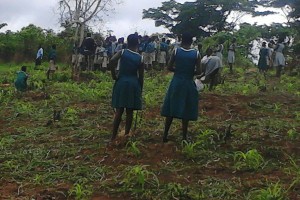 Clearing the land and planting the first crops.

Over the next several month, Two Pennies Ministry decided to fund the farm idea and maize, plantain and cassava was planted.  Mr. Awotwe has background in raising and selling hogs and he proposed a building a piggery, where students could learn about animal husbandry.  Our partner – Chilson Hills Baptist in Michigan has decided to adopt this program and begin fundraising this summer.

Although the farm doesn’t look like the red barn – furrowed rows set in idyllic scenes, we have pictures of the children growing their first produce.  Right now, we have received a call to pray for rain – the crops need more water, but are doing well otherwise.  We could have never realized where God would lead us with the ministry, but this is truly a partnership between people on opposite sides of the Ocean.