It seems like these days people are always looking to be transformed in some way.  We want to be thinner, richer, more respected, faster, smarter or better looking.  We know it can be done.  We’ve heard the stories of people who have overcome disabilities to become olympians.  Legends like Steve Jobs or Mark Zuckerberg who rose from obscurity to become some of the richest people on earth.  We are glued to our televisions for shows like Biggest Loser or Heavy and watch people lose triple digits in weight.  But how often do we consider the cost of what it takes to get there?

We don’t consider the time it takes for actresses (and actors for that matter) to have makeup applied.  We are full of admiration for someone like Walter Payton and his athleticism, but we forget his extreme training regimen – which included running sand dunes.  We even glorify the hours Zuckerberg spent writing code for Facebook by adding cool music in the movie the Social Network.  Was it really that cool?  I bet it was tedious beyond compare.   Malcolm Gladwell in his book Outliers coins the term “The 10,000 Rule”.  Simply stated, his claim (based on research), is that it takes 10,000 hours of practice to be an expert at something.  That is where most of us start to fall off.  Our transformations often end with the snooze button and our remote controls. 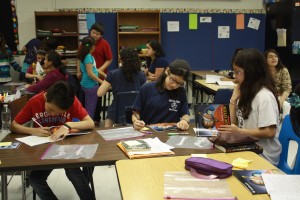 To transform, whatever our goal must be truly ingrained in us.   One of the most telling points of transformation comes from our handling of money.  There is no doubt that we understand the transformational part money can play.  As Americans we are fixated on it.  It is difficult to read the newspaper, surf the internet or watch television without being confronted with wealth or money in some way.

I teach sixth grade in a school where the students come from underprivileged families.  Nearly 80% of the students are on free and reduced lunches and we have some fantastic programs to support families in need.  This fall my classroom decided to raise funds for needy classrooms in Ghana through the Two Pennies Ministry.  Some people were skeptical about the goal – these were students from “poor” families right?   Yes – and that makes what I witnessed, from this group of students, so special.