Last night we had the privilege of celebrating three years.  It was wonderful to spend a couple hours talking about how much God has done through us in Ghana.  In this short amount of time we have paid for surgeries, built an orphanage, sent 7,000 books, constructed a church, hosted a pastor’s conference, purchased 2,000 chickens and so much more.

As I sat and reflected on all that has happened, I knew that it would take more than just a few minutes on a video to tell the story. Even as I talked with people about where we are going from here, they reminded me of different things that we have done.

I spoke briefly last night about a video that has been making its rounds on the web lately.  It’s about trophic cascade and the wolves of Yellowstone National Park.  If you haven’t watched it, follow the link below – trust me, it’s worth the five minutes.

When I saw this video, I immediately thought of the Two Pennies Ministry and the impact we are making in Ghana.  What started with a poultry farm, has become a brand new orphanage that is welcoming new children in through their doors.  But this really is only a small part of the story.  There are so many other things that are being done that don’t have the “flashy” look to to it, but are making a significant difference in people’s lives.  Here’s one short story I’ve shared but would like to share again.

My father is a retired teacher with three decades of teaching experience in the U.S.  Over the past two years, he has gone to Africa three times. On one of his trips to work in the schools, he came across a group of students who were sitting in the back of the classroom. They had no paper, no pencils and were doing no work.  In our school environment, these children would be identified as learning disabled and be given special services.  In most schools in Ghana, they are kept by themselves and ignored.  The reasoning is: if we lack resources, why expend them on children who have no hope of learning to read and write.  Resources need to be used on those who show promise. There simply isn’t enough to go around. 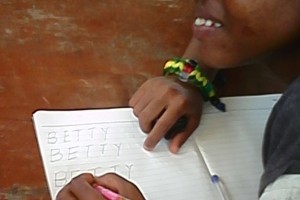 My father decided to spend some time with one of those children.  Her name was Betty. He gave her a pencil and paper and worked on writing simple letters with her. He spent time talking about the sounds that letters make and how to write her name.  In the short time that he spent at the school, he met with the teacher and talked about working with Betty.  I can only imagine what was going on in the minds of both the teach and Betty.  It certainly wasn’t the way things had been done in the past.  As usual, our team left the school with our contact information.  A few weeks later, we received an email from the teacher.  Attached was the picture above.

I’m not sure how much time the teacher spent with this student, or how it’s been going since then.  I can’t tell you that Betty is now working at grade level, or that this has translated into success in other areas of her education.  What I can tell you is this –  a girl named Betty – outside of Cape Coast in Ghana, West Africa – knows that someone cares. I can tell you that a teacher in that school has worked with someone previously considered a waste of time and has made progress.  Betty now writes her own name.  And that name is precious to others.