I mentioned in an earlier post how we witnessed people working hard for survival in Ghana, and my thoughts have consistently gone back to that over the past several weeks.  There is a tendency to think that here in the United States we work hard for a living and that we understand the concept of hard work.  It is part of our DNA, our “Can Do Spirit”.  We “pull ourselves up by our bootstraps”, we are proud of how “America Works” and how we are the leader in innovation and exploration.  I know plenty of laborers and tradesmen who work with their hands for a living.  I’ve had the opportunity to work alongside them and understand how they earn their money.  We have this idea that if we work hard we should be compensated for it – and generally we are.

What I witnessed in Ghana are a people who are accustomed to hard work.  There is no doubt that a half day of trying to keep up with the average laborer would be enough to work my body to exhaustion.  The difference is, they aren’t compensated for their work.  They do this work for simple survival.  Let me share a few examples with you.

On our first morning in Ghana, we needed to get to Countryside Orphanage.  Our ride there was Tetteh, Moses Kofie’s Uncle.  The only problem was that the car was low on hydraulic fluid.  So, before we left we went to the local filling station and bought the correct bottle and gave it to the assistant mechanic to put it in the car. 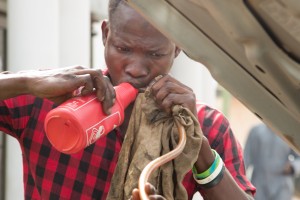 We were short on Hydraulic fluid .

I assumed that he would use a funnel, but I discovered they had a different way of doing things.  He inserted a long hose into the bottle, ran the hose into the appropriate location in the engine (here my complete lack of any automotive skills shows), and proceeded to blow the fluid into the car.  Now, lest anyone think that he had some sort of special technique that made this simple or clean, let me relieve you of that notion.  This process took a full ten minutes durning which he used the filthy rag (pictured at right) to wipe his mouth and lips of excess fluid (did you know it is red?).  He took his job very seriously and charged us a full 2 Ghanian Cedis to perform this task.  The is the equivalent of $1.12.  Tetteh was incensed, thinking we had been taken advantage of because we were white!  I was beginning to think the contestants on Fear Factor (remember that show?) were a bunch of sissies. 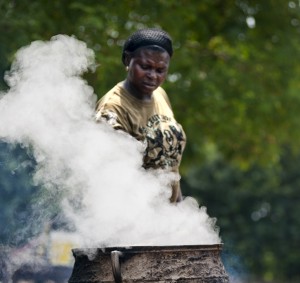 We spent two days at Countryside Orphanage where we watched the care mothers taking care of 140 orphans.  One of the jobs that amazed me the most was their cooks.  It was over 90 degrees outside on a regular basis with a high dose of humidity.  We stuck to the shade whenever we could.  The cooks, on the other hand, couldn’t avoid the heat.  They were either inside a brick room pounding maize over a clay frame oven, or outside stirring boiling pots of rice.  They did this for hours.  Every day.  When they had finished cooking, they had to serve the food, clean up, and get ready for the next meal.  It was a never ending, and thankless task.  Their compensation?  One Cedi per day.  Fifty-six cents to endure that inferno seems unbearable.  Two Cedis to blow hydraulic fluid for ten minutes now seemed like less of an amazing feat.  Somehow, my idea of hard work and rewards were being challenged.

The final example is one that is impossible to ignore in Ghana.  They call themselves “the traders”.  These consist of the average person that sells anything that can bring a Cedi on the street.   Oranges, meat pies, smoked fish, mix-matched shoes, used clothing, cell phones, fabric and machetes.  You name it and you can find it sold by people on the street.  The one consistent individual that you see everywhere is the water salesman.  Purified water is sold by the bag.  The women carry bowls full of these bags on their head for hours a day, selling their supply to passing motorists.  Since the weather is so oppressively hot and the water is unsafe to drink, purified water is in guaranteed demand.  The going price?  A nickel a bag. 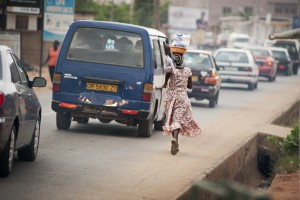 Dashing after a potential sale.

When traffic slows down, you hear these salespeople calling out, “PURE!” “PURE!”  They walk up and down the rutted roads balancing a stack of water bags on the end hoping to sell enough bags to pay back the cost and make enough to feed themselves. In some cases, they have a family to feed based on these sales.  Any sale is too good to pass up.  Sometimes this means sprinting after a vehicle where someone showed that they wanted to buy.  We also saw several people drop the coin during the transaction. The water-carrier, never lost track of that coin, and they would wait patiently for their opportunity to snatch it off the street.   Do the math.  Think about how many bags you would need to sell just to make enough to eat.   Priscilla’s mother does this for a living – which is why she can’t afford to stay in school.

I have often thought of those more fortunate than me and wondered why they don’t save a little money to get ahead.  My trip showed my the foolishness of my reasoning. When your sole concern is survival, you don’t think about getting ahead, you are grateful for what you have right now.  I am still learning to be grateful for what I have now.  I am learning to appreciate my work more and be thankful that I don’t get a mouthful of hydraulic fluid, have to work over a million degree oven or chase down cars for a five cents.  I feel more blessed every day and pray that I can use that to be a blessing to those less fortunate than me.