When you first hear the name Ebenezer, what comes to mind?   If you are like me, your thoughts flash instantly to Ebenezer Scrooge, the miserly and cold-hearted rich man in Charles Dickens, A Christmas Carol.  A man whose unfeeling stinginess is now synonymous with the label Scrooge.  While in Ghana, I met a man by the name Ebenezer who is as far from a scrooge as one could possibly be.  We had the privilege on both our trips to talk to this amazing individual. 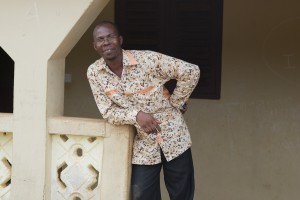 Ebenezer at the Love and Care Foundation

Ebenezer grew up as an orphan.  He lived a difficult life, sleeping where people had room for him and eating with whoever could spare a meal.  He lived with a wide range of families and experienced their generosity – even when there wasn’t much to give.  From this humble start, Ebenezer was able to gain an education and eventually attend Cape Coast University.  He became a teacher and eventually the headmaster of a school.  Although this is a highly respected position, it isn’t one that will make you a rich man.

That isn’t all that Ebenezer does.  He also leads a congregation in Asebu.  That’s right, he’s a full time headmaster (which includes teaching), and a full time pastor.  With his warm smile and hearty laugh it is easy to see how he can lead people.  After we had delivered letters to students at his school, he hopped into our car with us to head off to the mechanic where they were fixing his car.  He fell into an easy conversation with the men working on his car – which appeared to be on it’s last legs.  They applied a quantity of electrical tape and somehow the car was running again.  He wanted to take us to a place where his true passion lies.

The Love and Care Foundation 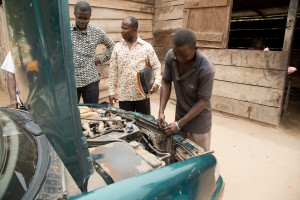 Ebenezer and the mechanics

We followed him through rutted dirt roads for about an hour while he took us visit his orphanage – The Love and Care Foundation.  This orphanage was begun by Ebenezer and his wife and continues to be completely funded by them.  His wife is an accountant for the University of Cape Coast.   They began the orphanage in March of 2011 with just a few kids that were in need.  By August they had 10 kids and couldn’t afford to take any more – even though the need was evident.  This is why he and his wife work three full time jobs and still drive a car held together by tape.  It is also why he seems so joyful.

He knows that he’s in the center of God’s will.  He dreams of making a difference in these kids lives.  He understands what unwanted children can become when someone cares.  He loves that God has chosen him for this task.

Right now, Ebenezer has decided to move the orphanage closer to where he lives in Asebu.  They are remodeling a house and hoping to equip it with computers, so that the children can receive a good education.  The remodel will cost about $3,500 US.  He and his wife are unflinchingly sinking their money into this knowing that God will provide.  Pray for Ebenezer  and give praise that God has provided such a champion for these children in the heart of Ghana.