In the world today we recognize and respect people who make a big impact.  We doff our hats to the likes of Warren Buffet and Bill Gates who give large amounts of their wealth to charity.  There is even a webpage dedicated to this.   We honor athletes when they visit children in hospitals.  Celebrities like George Clooney and Sean Penn are lauded when they stand up for a cause like genocide in Sudan or disaster relief in Haiti.  Their actions are honorable and should be recognized as such.  The only problem is that sometimes we get fooled into thinking that only the powerful or popular can really make a change.  My class at Highland Elementary showed a different way. 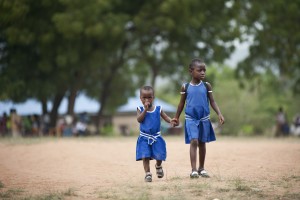 Going to School in Ghana

As I explained in my last post, my students don’t come from the most privileged background, but when they heard about the students I would be visiting in Ghana, they asked how they could help.  They held candy sales for several weeks to raise money to buy supplies.  They wrote letters to them to tell them about their lives and to find out about life Africa.  We used our funds to buy books, pencils, pens, and paper for the classrooms over there.  When we received our first letters back from Ghana, the buzz in my class was electric.  When pictures of the students were added to this equation, their reaction was truly amazing.  I had expected this whole experience to simply be an interesting pen-pal experience.  It was anything but that. 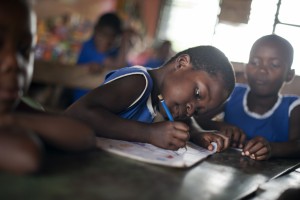 We can make a difference

So many of my students have had the experience their actions don’t have much of an impact.  They believe that they are around to follow the rules and do their homework.  The pictures of the their pen-pals holding a bag of supplies that they provided for them changed that.  Suddenly, they mattered.  The transformation was most evident in some of the students who were the biggest behavior problems.  It wasn’t long before they began asking what else they could do.  They didn’t want to stop the communication.  They didn’t want to stop helping.  When they saw the pictures of how little these students had, they started to talk “big picture”.  They realized that they mattered.  They could – and did make a difference.

For Bill Gates a donation of $500 wouldn’t mean a thing.  To my students it was a large sum.  Thirty-three students came together and made a difference.  The change they made over there pales in comparison to the change within themselves – and me as their teacher. On the final day of school, students came to me and asked – “What more can we do?  Can we keep going next year?”

On the first day of summer.